Hi! This may seem like an article series, and that's because it kinda is, thing is just that I don't have that many ideas for other classes on this series. Like, I got one at best for Fighter, seeing how it's literally just about a guy who can handle any weapon and any armor (ignoring archetypes). For casters, I got something really neat, but the problem there is that I sort of worked them out by changing mechanics slightly. You'll see what I mean probably in one of my next articles. Anyway, before I get totally sidetracked, I should just reiterate that I can't promise sequels, and I can't promise the sequels coming in alphabetical order either.

Now then, with the silly intro aside, we can get into it.

It Started with a Samurai

Long ago in a distant land, I, Aku, the shape-shifting Master of Darkness, unleashed an unspeakable evil! But a foolish samurai warrior wielding a magic sword stepped forth to oppose me.
Before the final blow was struck, I tore open a portal in time, and flung him into the future, where my evil is law!
Now the fool seeks to return to the past, and undo the future that is Aku!- Samurai Jack, Intro

Samurai is one of those characters that people want to play in D&D. A cool, disciplined warrior, who travels the land and uses his sword to make right what goes wrong. What does one think of when someone say samurai? Maybe a fighter would fit, since they're a skilled warrior. Maybe a kensei monk. Or hell - even a rogue could work. But, what if I told you that the barbarian could also fit? You just need to rename features to make it work.

Picture this. A warrior whose skin is tough as steel, someone who can enter the changed state of mind where he is much more vigilant of his surroundings, someone who is faster than most regular men. He knows that to attack well, sometimes he has to risk getting hit in return to get a really good hit, and once he's experienced enough, he knows how to hit person not just really good, but really freaking good, causing some very significant injuries. And then there's his unrelenting spirit that keeps him alive even in the direst situations.

Now, let's see what are the mechanics I used here. I started with the Unarmored Defense, which does not need renaming. Rage is the next feature, which in this case would be reflavored into something like Vigil, or Concentration. What follows is Fast Movement that doesn't need renaming, and after that Reckless Attack that's more like Risky Maneuver. Another feature that does not need renaming is Brutal Critical, and finally, Relentless Rage that in our samurai example is more like Unrelenting Spirit.

(Note: From my past experiences, I would avoid renaming the features as a player because it can confuse DM. I would refer to the features as I use them with their original names, but describe them as part of the story in a different way.)

I'm sure that by now you can see this can work - barbarians don't just have to be easily angered people who use big bulky weapons and live in tribes. It's a nice idea that I am a fan of, but then WotC announced that their next book is going to have Samurai archetype for Fighter. Well, I guess here's to that then, I'll have to come up with a new name. Maybe Ronin could work...

Last night I was thinking about the barbarian once again, and I got a brilliant idea that made me go "I need to write about this on my blog!". What got me thinking was one single look at the right emotion wheel. 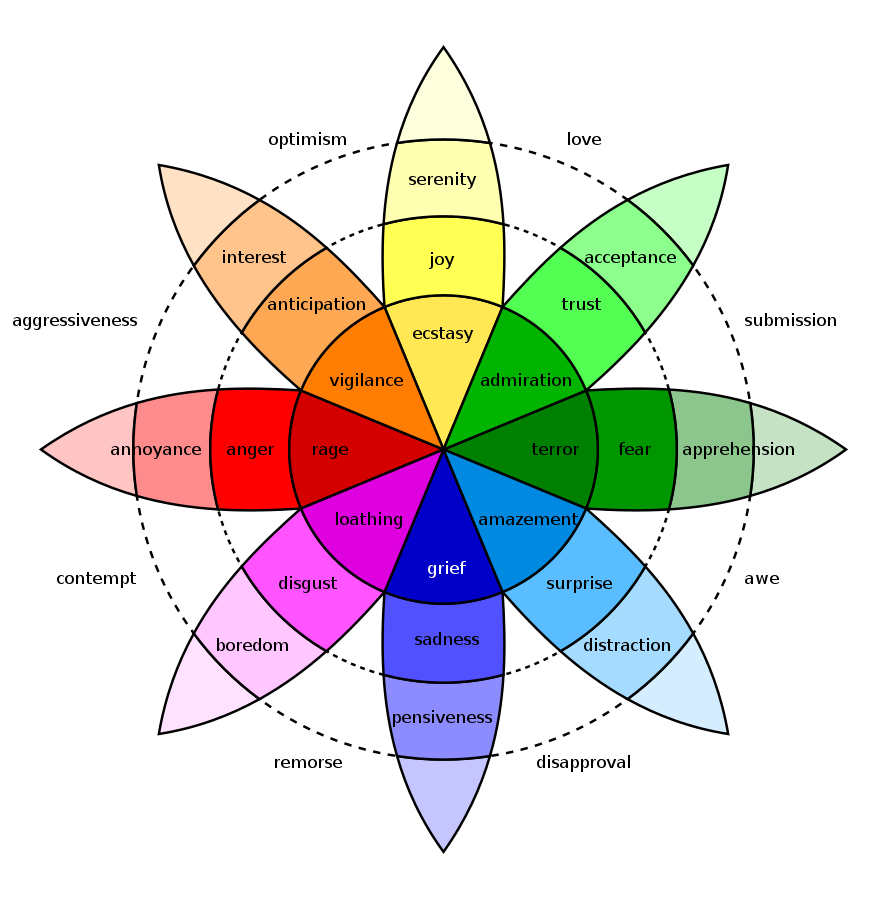 What if Rage was instead replaced by most of the emotions inside?

Vigilance I already explained above.
Ectasy would suit someone who is really optimistic about life, driven and joyful, who wants to spread joy all around.
Admiration is fitting for someone who has an idol they would do anything for.
Terror is for someone who works the best when under the pressure. Think Shaggy from Scooby Doo (yes, it's a stretch, but imagine he'd put those muscles into fight instead of flight).
Amazement I'm gonna skip because it's not really worth it. Being surprised isn't really something that can be controlled, and barbarians already get a feature against being surprised.
Grief wouldn't work either, I'd dare to say that sadness is the greatest enemy of the barbarian. Especially if it makes them nihilistic, if it makes them feel like nothing is worth fighting. No kind of emotion could save you from that really.
Loathing would work well for an evil* barbarian who is driven by hatred of some sort - racism, hatred for magic, hatred for a nation etc.

(* nobody is really evil, evil is subjective, but I can't be bothered talking about that again)

Of course we could look at certain comic series about magic rings for further inspiration, like the emotions (that are not really emotions): Compassion (who fights for others, think Steven Universe), Hope (who believes in a better future), Willpower (who is powered by their own determination, think Undertale's protagonist) and Greed (like Wario, or Mr. Krabs from Spongebob).

So, what's the core of the barbarian? Their fighting is driven by their emotions. Once we realize that, we can map the non-magical classes onto two axes. One is focused on emotions, with barbarian who unleashes their emotions for the world to see on one end, and monk who suppresses them on the other end, and the other axis being that of combat focus - fighter is focused on general damage, with lots of less effective attacks, fighting style of their choice etc., while rogue is focused on making single attack that's very effective. Of course there's more to all four of these classes, but this is how I would map them.

Then there’s the problem of strength of personality relying on Charisma, but… meh, I can let this pass. It’s just describing what’s already in game in a different way.

Thank you for reading, and have a nice day!
Posted by Ed P at 22:46 No comments: